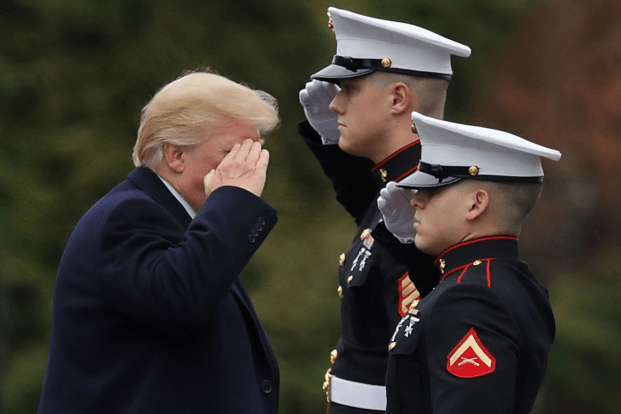 In a year in which the President has consistently upset normal expectations of conduct becoming to that office, Trump continues to bend the image until it shatters. His latest demand: a grand military parade, the likes of which America has never seen. He first expressed his desire when standing alongside French President Macron last summer, watching the extravaganza thrown for his benefit on Bastille Day. Trump was awed, fascinated, and driven to exceed it.

He has apparently been mulling this over since September, thinking about it in the midst of all the partisan and personal tweetstorms he indulges in daily as he guides the ship of state ever nearer to the rocks of its destruction.

Here are five reasons why there should be an official and torrential rainstorm on his parade.

It would be way expensive. Although “his generals” have not put a figure on this event we can be sure that it will cost in the millions. Everything public these days costs in the millions. A traffic light costs between $250,000 and half a million to install, plus $8,000 a year to maintain. Advertisers paid $5 million for a 30-second commercial at the 2018 Super Bowl. Elon Musk and SpaceX plan to spend $10 billion on their commercial space flights. In 1999 the M1A1 SA Abrams tank cost about $6.2 million for a brand-new one. Estimates are that the cost has risen to about $8 million. These would most likely be the tanks rolling down Pennsylvania Avenue on the 4th of July if Trump gets his way. The tanks are made in Lima, Ohio—and they have been in continuous production since the end of World War II—but they are in storage, all 2,000 plus of them, near Reno, Nevada. How much would it cost to ship out a decent lineup of tanks for Trump’s parade? Millions.

It would be a logistical nightmare. Imagine those tanks chewing up the asphalt of our DC streets. District crews can’t keep up with the potholes that grow in the winter like cancerous cells, much less have the streets ready for work on the 5th of July. And where do you put a fleet of tanks while waiting for the Grand Marshal’s signal? How many ballistic missiles could fit end to end down Constitution Avenue? How do you park a missile anyway? If their trailers get a flat could Triple AAA be called?

And think of half a million people marching on the Mall in protest.

The saber rattling is cringeworthy. Assuming that we’ll still be here come the 4th of July, this crude display of American might can only antagonize our enemies and embarrass our allies. Why should the largest military force in the world need to flex its muscles? Isn’t it enough that the United States outspent China, Saudia Arabia, Russia, the United Kingdom, India, France and Japan combined by $16 billion on its defense in 2016? That defense spending accounts for 16% of federal spending and almost half of our discretionary spending? And do we really have to act like the countries we so fervently despise?

It’s against our ideals. Since 1776 the United States has been at war for 222 out of 239 years. One estimate puts it at 93% of the time, with only 20 years of our history in total in which peace broke out. Despite that statistic, the better angels of our nature want to believe we are a peace-loving people, only driven to war as a last resort in a Hobbesian world of constant aggression. Gratuitous displays of military machismo feed the primal hostility that lies just under the surface. With the gutting of the State Department and the Trump administration’s constant goading of North Korea and Iran, such a display only confirms the worst possible scenario in the global community. Can we not be leaders in working for diplomatic solutions to hostilities?

It will only feed Trump’s ego. The White House has denied that all this planning is being done for Trump’s self-aggrandizement. Of course it does. We are told that this is simply the President’s way of showing his vast appreciation for the American military. This from the man who was given five deferments during the Vietnam War because of bone spurs. Somehow, some way, Trump will turn legitimate gratitude for the military and its veterans into a celebration of his own awesomeness. The day after his parade he’ll be saying, “They say this is the best military parade the world has ever seen!” Take that, France! We’ll never hear the end of it. If you thought he’d driven the inauguration numbers into the ground wait until he makes up the stats that will dominate air time for the foreseeable future.

Trump will not be outdone in public spectacles. His stomach must have been churning as he watched the Bastille Day parade. After all, Macron had bested him in the grip-and-grin, and here he was, with a mere snap of his French fingers, summoning this breathtaking, in-your-face unleashing of military song and dance. This could not be happening. Mon Dieu, the French, after all! So Trump will pronounce, he will proclaim, he will demand, he will snarl, until he gets assurances that his parade will be the greatest human event since the inauguration.

His generals are predictably deferential, even circumspect. No estimates have been released. Everything is in the initial planning stages. Perhaps they hope Trump will forget or be focused on beating down John McCain or giving Devin Nunes the Congressional Medal of Honor. Maybe they’re counting on him being preoccupied with the final release of the Mueller Report. After all, they don’t know where the money will come from for all this, and Eleanor Holmes Norton, the Congressional representative for the District of Columbia, has made it clear that the city is not footing the bill. If Trump wants it, he’ll have to pay for it.

Not a dime of Trump’s own money will be spent on this, we can be sure. Could he count on the Koch brothers then? Sheldon Adelson? The Mercers, perhaps? Betsy DeVos and the rest of his billionaire cabinet?