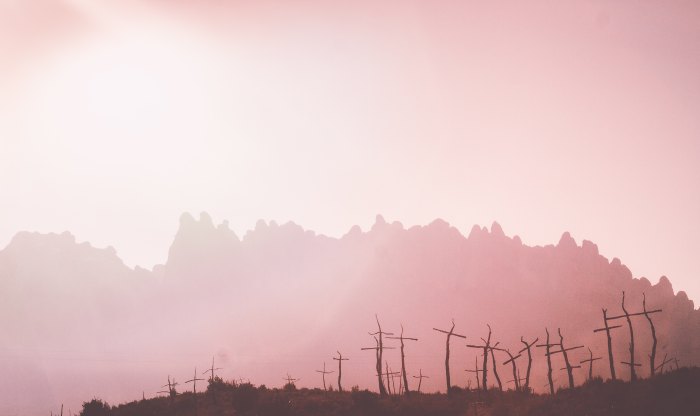 He was in the form of God, but did not think to seize on the right to be equal to God . . . being born in the likeness of a human being; and being found in the guise of a human being, he humiliated himself and was obedient to the death, death on the cross. Philippians 2:7-8, Richmond Lattimore, translator

Every life that begins points forward to a death, a truth we mortals carry like a stone in our shoe.

Does every father grasped in the clenching fear and joyous awe of the birthing hour cast his mind forward to the death of his son? Perhaps Joseph did, caught up in a mystery whose dimensions seemed to waver in and out of focus with his young wife’s hoarse cries. There is no mention of a midwife in the Gospel nativity stories. Does Joseph deliver the child himself?

Questions like these are how we fumble our way to the heart of the nativity story. We ask them because we want to time-travel back, to be there in that moment to try to grasp how—no, why?—an infinite God plunges deep into our world in order to surface as an infant, an infant for whom the mere rumor of existence is enough to trigger a massacre.

From a reasonable perspective, it would be hard to find a less auspicious beginning for a clandestine King of kings and Lord of lords: a baby born into poverty under one of the most corrupt governments of an empire notable not only for its reach but also for its cruelty. From a revolutionary standpoint, chances for success in overthrowing the Empire hover around zero. I don’t think we can exaggerate how awful the odds are here.

Imagine the storyline pitched by the producers of a film company to the head of a major studio:

What kind of film is this?

It’s kind of an action-adventure, but with a strong underdog angle.

Okay, a baby is born under mysterious circumstances to a poverty-stricken couple who have to flee to another country to avoid a massacre of all children under two by a corrupt and paranoid tyrant.

No. They go around this country healing people and teaching them about loving their enemies and turning the other cheek.

And finally, he’s captured, all his friends desert him, and he’s killed.

Wait. He’s got no superpowers?

Too depressing. What’s the point?

Well, he comes back to life.

No, no zombies. He comes back to life and then after awhile he disappears.

And that’s it? Are you kidding me?

Well, he returns later and sorts everything out.

When does he return?

Nobody knows, it’s just that—

Get outta my office.

The nativity scenes we witness in paintings are as peaceful and placid a scene as one could imagine. The baby Jesus coos and waves his little fists. Mary is dressed in robes of cerulean and white and gazes benignly on her infant son. The magi are there, having arrived not a moment too soon, but months after they set out from their city. In some of the paintings there are shepherds kneeling by the manger. They’ve already seen angels that night, a heavenly host of them, their burning towering forms lighting up the hills for miles around. Naturally, the shepherds are terrified, but it’s a terror that becomes raw energy; they race down off the hills and into the town. (How do they know where to go?) But they find the place and slip inside, some to kneel, some to stand in the shadows, panting and glancing at one another with wondering eyes.

And God held in his hand

A small globe. Look, he said.

The son looked. Far off,

As through water, he saw

A scorched land of fierce

Cast their shadows; a bright

The sky. Many people

Held out their thin arms

To it, as though waiting

For a vanished April

To return to its crossed

Them. Let me go there, he said.

God must now think from behind the eyes of a human being. Those considerable limitations are what remains to work with. No superpowers here, just the steady consistency of vulnerability and love. Will that be enough?

If this really was the kairos, the right time for this intervention in Earth-history, we wouldn’t have seen it had we been there. Even if we had been in Jesus’ roving band of disciples, we couldn’t have understood it. As long as power meant violence to take down the enemy none of this would have made sense. And if we’re honest it still doesn’t make sense. The reason we accept it, this Incarnation, this embodiment of God in human flesh, is that we no longer see it as the skandalon, the scandal it really is. What kind of god would have the patience, not to mention the love, to work with creatures who resolutely kill everyone who offers them hope?

“The central miracle asserted by Christians is the Incarnation,” said C. S. Lewis in The Joyful Christian. “They say God became Man. . . Every particular Christian miracle manifests at a particular place and moment the character and significance of the Incarnation.”

This is where it begins for us. It doesn’t really matter if we can’t figure out the biological status of a virgin birth or even if parthenos means a “young girl of marriageable age” versus a virgin who has never had sex. What matters is that we accept this gift of God become human, scandal and all.

Advent for me means the coming of the Christ-child into this world, through the back door of the world, under the silent stars of the world, for the world. It always catches me off-guard, which is good, because we should always be surprised at Advent. Surprised that the kingdom begins in such a quiet way; surprised that at least once during the year we can say in all honesty, that we were blind, but now we see; surprised that silence carries a deeper truth than we could think of on our own.

After surprise comes wonder, since Christ comes to us in every breath we take, every person we meet, in the dust on the road to Emmaus, in the waves we sink into, in the beauty of communion with one another. All of these are Advent moments; they give us a way to live inside the saying, ‘Lo, I am with you alway, even to the end of the age.’

3 thoughts on “A Scandal We Can Live For”